In the shadow of the imminent failure of the Gunboat company, the owner of Gunboat 55-05 ‘VAIVAI’, retrieved his part-built boat from company’s premises and set about the task of finishing the build under his own control.

This presented NID (Nigel Irens Design) with an exciting opportunity to help show what could be achieved using components that had been built in the original GB55 moulds as the raw material.

A close collaboration was soon established between the NID office, the new build team and the many suppliers of equipment needed to re-define the build programme.

All aspects of the design were reviewed with the aim of optimising the delicate balance between high performance and comfortable cruising – which had been at the heart of the original design brief.

As result of the excess weight built into the early GB55’s the sterns of all boats was elongated by running the lines on aft to a form a new transom, making the boat 57ft LOA rather than the 55ft originally drawn. This modification has been retained in the revised version of the boat which is now to be known as the GB57.

The most significant modifications to the original build programme were:

Weights and Centres:
Keeping control of the weight of a boat like this is fundamental to the success of the build and to help keep this on track a permanent weight monitoring system was installed and daily updates were sent to NID to help identify any problem areas quickly. This discipline also helps the build team to understand and focus on this vital aspect of the build process.

As this was a re-fit, the first stage was to weigh everything not bolted down and then weigh the boat itself. This gave a realistic starting point to assess the possible outcomes as the weekly weight edits were carried out at the NID office.

Installing a system in a performance catamaran that offers accurate steering of the boat with the minimum of friction is challenging and although there are plenty of low-budget ways to do this but results are usually disappointing.

The yard-designed set-up not only resulted in the steering feeling heavy and unresponsive, but also caused several auto-pilot issues.

In this case the whole drive train has been overhauled with a view to allowing more accurate and effortless steering – and so a more rewarding experience for the helmsman.

Rudder bearings have also been redesigned to reduce friction – especially when the rudders are highly loaded, and also to improve longevity. The lifting rudder blades have also had their aspect ratio increase for more performance and better balance.

Rig and Deck layout:
The sail and deck plans have been reviewed with the sail areas being increased. The deck plan was updated to give additional staysail tack point and two additional halyard winches on the mast, along with a few tweaks to the existing layout.

Centreboards:
The original pivoting centreboards were replaced with dagger-boards to give more options on board area and sailing balance. The dagger-board installation did require a cabin redesign which in turn allowed the engines to be repositioned to an amidships location to lessen the pitching moment and improve the trim.

In general lifting dagger boards offer more performance while pivoting centreboards are tend to find favour with owners who are more cruising orientated. 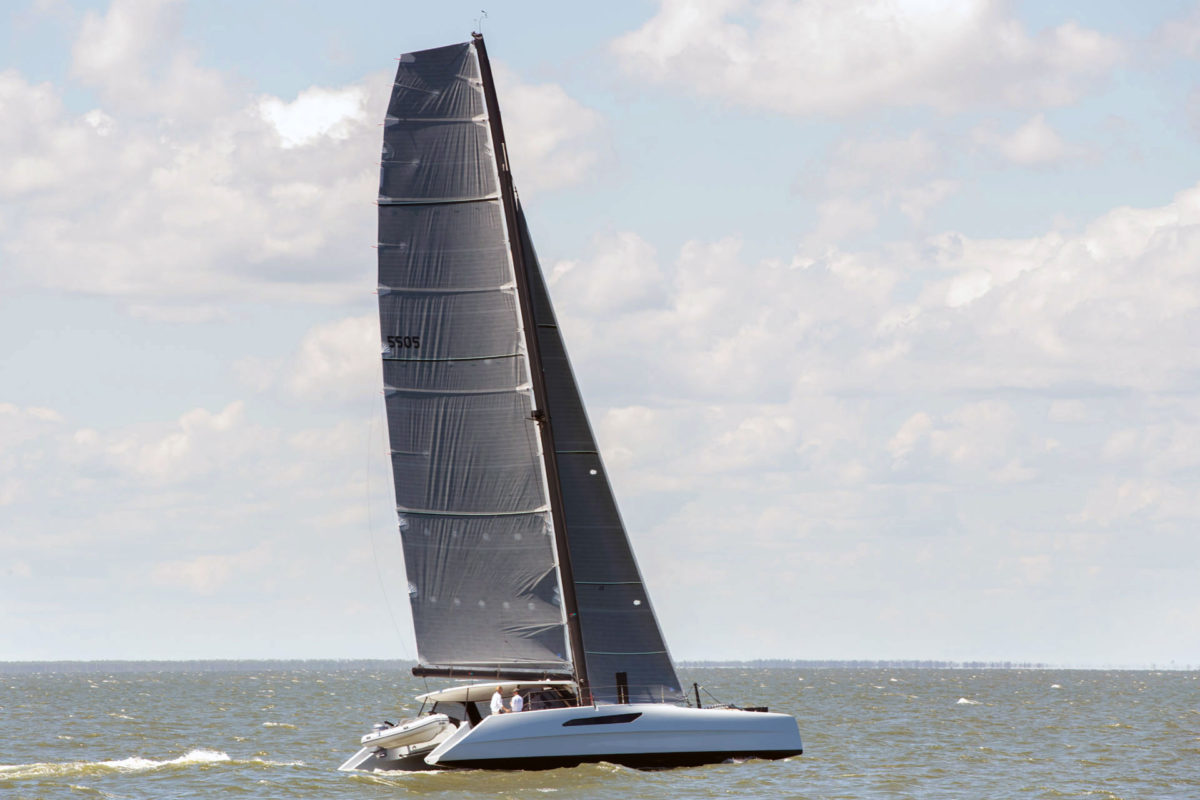